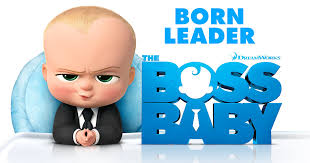 The Boss Baby is an American 3D computer-animated comedy film, produced by DreamWorks Animation and distributed by 20th Century Fox. The film is directed by Tom McGrath and written by Michael McCullers. It is loosely based on a picture book of the same name, written and illustrated by Marla Frazee. The film stars Steve Buscemi and Alec Baldwin. The film was released on March 31, 2017.

A seven-year-old boy is jealous of his "fast-talking, briefcase-carrying" baby brother. When he goes on a mission to win back affection of his parents, he finds out about a secret plot by the CEO of Puppy Co., which revolves around his baby brother and threatens to destabilize the balance of love in the world. Both brothers must unite to "save their parents, restore order to the world and prove that love is indeed an infinite force."

Retrieved from "https://dreamworks-boss-baby.fandom.com/wiki/The_Boss_Baby_Movie?oldid=128"
Community content is available under CC-BY-SA unless otherwise noted.